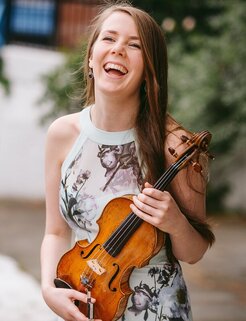 Winner of the 2020 Royal Overseas League Music Competition and PDGYA Young Artist Eleanor Corr is a British violinist, enjoying a varied freelance career in the UK and Norway.
She has recorded Stravinsky’s L’Histoire du Soldat for Linn Records, conducted by Oliver Knussen. She has performed at Royal Albert Hall Elgar Room with duo partner Aleksandra Myslek, and has given solo and chamber recitals at Buckingham Palace, Wigmore Hall, Sage Gateshead, Brighton Early Music Festival, and broadcasts on BBC Radio 3.
Concerto highlights include performances with Multi-Story Orchestra, London Chamber Soloists, London International Orchestra and University of London Symphony Orchestra at venues including St. George’s Bristol and Wells Cathedral. This year she looks forward to her Queen Elizabeth Hall debut, her Norwegian debut as concerto soloist in a tour of East-Norway, and several concertmaster engagements.
Eleanor has led the English Touring Opera across the UK, been Guest Principal 2nd violin with several Norwegian orchestras, leading to return invitations as concertmaster and director, and has performed in the UK’s major concert halls with orchestras including London Symphony Orchestra and the Royal Philharmonic Orchestra. Eleanor is a passionate chamber musician, playing regularly on both modern and period instruments in duos with pianists Emil Duncumb and Aleksandra Myslek, and with quartet Pocket Sinfonia, winners of the St. Martin-in-the-Fields Chamber Competition Audience Prize, REMA Early Music Network Young Artists and former BREMF Young Artists.
Eleanor studied at the Royal Academy of Music, where she was Sterndale Bennett Scholar, winner of several prizes and leader of RAM Symphony Orchestra. She plays a Santagiuliana violin generously loaned by the Harrison Frank Foundation.
www.eleanorcorr.com

Pianist/fortepianist Emil Duncumb has performed in numerous concerts and festivals both at home in Norway and abroad both as a solo pianist and chamber musician. He was awarded 3rd prize at the Musica Antica International Fortepiano Competition. Highlights include appearances at Oslo Early Music Festival, Musica Antica Festival (Bruges), Northern Lights Festival (Tromsø), Olavsfestdagene (Trondheim) and International Arts Festival (Gozo). Emil has performed at major venues such as the Oslo Konserthus and Gamle Logen in Oslo, the Presidential Symphony Hall in Ankara, as well as London’s King’s Place and Wigmore Hall with outstanding reviews.
Born in Sheffield in 1990, Emil moved to Norway when he was seven, and started playing the piano the following year. After being admitted to Barratt-Due’s Young Talents Program 2002 with Mark Nippierd, Emil won numerous prizes at the Norwegian Competition for Youth, including two first prizes in the solo category and two first prizes in the duo category with his brother Jadran, who he has played with extensively as a piano-guitar duet ever since. In 2008 Emil won the Senior Class in the Sparre Olsen Competition in addition to an overall Honorary Award and became a student of Liv Glaser. Since then Emil’s studies have taken him to the Royal Academy of Music, the Norwegian Academy of Music and the Juilliard School under the guidance of renowned musicians such as Christopher Elton, Joanna MacGregor and Håvard Gimse.
A keen chamber musician, Emil has has performed with fantastic musicians such as his brother, Jadran Duncumb, the Engegård string quartet, Luke Witchger (Concertmaster for Orchestra Iowa), Nihat Agdac with whom he has performed extensively in Turkey and Cyprus and Eleanor Corr, with whom he founded the chamber group “Pocket Sinfonia”.
Emil particularly enjoys performing works from the classical and early romantic periods both on modern and period instruments, and is currently working on recording transcriptions by Johann Nepomuk Hummel of Mozart’s piano concerti, overtures and symphonies for chamber ensemble on the fortepiano with Pocket Sinfonia.
www.emilduncumb.com