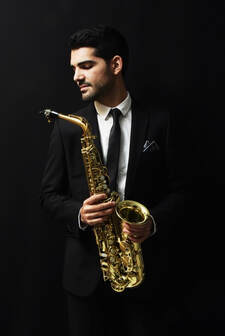 Manu Brazo is a Spanish saxophonist who has established himself as one of his generation’s most versatile young musicians.  At ease on the stage, he is often praised for his unique sound and virtuosity as well as having the ability to have a close and intimate relationship with his audience.
Over the last few years Manu has been a regular recitalist at British and international music festivals such as Leeds International Concert Season, Tetbury Music Festival, Newbury Spring Festival, Aegean Arts Festival in Crete and Risor Kammermussikkfest in Norway.   He has also given solo performances at the Royal Opera House, Victoria and Albert Museum, St Martin-in-the-Fields, Kings Place, the Cutty Sark, Teatro de la Maestranza (Seville), St James’s Piccadilly, London Saxophone Festival and the Royal Academy of Arts.  Last summer Manu was invited by Live Nation to be the opening act for Sir Cliff Richard at Greenwich Music Time Festival to an audience of 8000 people.
After the cancellation of his forthcoming recording and concerts as a result of the pandemic, Manu took matters into his own hands and built his own recording studio, learnt how to edit and recorded an album of solo saxophone music called Solo Dialogue which was released in June.  The album has been well received on the back of which he has received excellent reviews, was a guest on BBC Radio 3 In Tune, featured on Scala Radio as one of Angellica Bell’s Young Artists and the videos were supported by Classic FM on Twitter and Facebook.
www.manubrazo.com

Indonesian pianist Prajna Indrawati gained her Master of Performance degree in Piano Accompaniment (2018) at the Royal College of Music studying under Roger Vignoles, Kathron Sturrock, and Simon Lepper. Accompanying singers, she has performed in venues including the Victoria and Albert Museum, Royal Festival Hall and in “Brahms and his poet” book’s launch by Natasha Loges. She was awarded second place for Accompanist Prize in Brooks van der Pump English Song Competition and Joan Chisell Schumann Competition and Titanic Memoriam Award for accompanist in Lies Askonas Competition 2018. With soprano Joyee Cole, she also attended Oxford Lieder Mastercourse 2018 led by Wolfgang Holzmair. Prajna has performed on BBC Radio 3’s In Tune and at numerous venues in London as well as  the Newbury Spring Festival, Alderney Music Festival, 2020 Leeds International Music Festival and in Seville (Spain) and Crete (Greece).
She has participated in masterclasses with renowned pianists and has accompanied many singers in concerts and several choir festivals in Europe and Asia. With soprano Sofia Livotov, she been accepted to join the Oxford Lieder Mastercourse 2021 supported by HelpMusicians UK; they also took part in NexTus Online Festival 2021 and will compete in the First International Song Competition Bolko v. Hochberg in Görlitz – Zgrozele in March 2022.