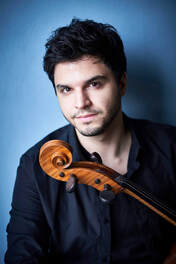 In 2019 Jamal Aliyev made his debut with the BBC Scottish Symphony Orchestra at the St. Magnus Festival broadcast by Radio 3.  Other highlights include appearances as soloist with the City of Birmingham Symphony, Philharmonia, Royal Northern Sinfonia, London Mozart Players, CBSO Youth Orchestra and  Symphony Orchestra Simón Bolívar of Venezuela.
He gave recitals across Turkey with renowned pianist Fazil Say including the Ataturk Culture & Congress Center and TIM Maslak Show Center, took part in the Istanbul Music Festival, and appeared as soloist with Presidential Symphony and Istanbul Symphony Orchestras.
This season Jamal makes his debut performing the Elgar Concerto with the Royal Philharmonic Orchestra and at the Trans-Siberian Festival with the Tomsk Philharmonia.  He returns to Wigmore Hall, records with Fazil Say and gives recitals throughout the UK and in Turkey.
In 2017 Jamal made his BBC Proms debut and won the Arts Club – Sir Karl Jenkins Music Award. His debut CD Russian Masters was released by Champs Hill Records to critical acclaim.  He was selected by Young Classical Artists Trust in 2017 and Concerts Artists Guild in New York in 2019.
Born in Baku, Azerbaijan, Jamal studied at the Yehudi Menuhin School and the Royal College of Music. He is currently undertaking an Artist Diploma at the Guildhall School of Music & Drama.

William Fielding is currently spending a year in Toulouse studying the organ with Michael Bouvard. When not studying, he works largely as an organist and collaborative pianist, working with instrumentalists and singers alike, and is in demand as an accompanist both in Toulouse, and throughout the UK. In 2017, William performed Stravinsky’s Rite of Spring for piano duet in collaboration with Dance School of Scotland, and performed many times with his long-term chamber music group, ‘The Strathearn Piano Trio’. William toured the Czech Republic with violinist Joel Munday and performed a programme of two-piano works with Łukasz Krupinski in Marbella, Spain, as well as working with students and professors from the Royal College of Music, including Itzhak Rashkovsky, Adam Walker and Jamal Aliyev.
William has performed as an organist and pianist in venues including The Queen's Hall and The Usher Hall, Edinburgh; St Mary’s Cathedral, Edinburgh; Glasgow Royal Concert Hall; Leeds Town Hall and The Barbican, London. He looks forwardto his time at the Toulouse conservatoire over the coming year, and returning to London next year.