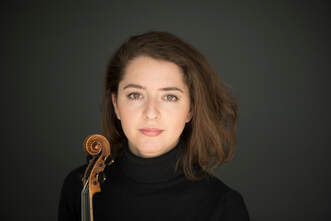 Born in London in 1994, Mathilde Milwidsky has received praise from The Strad for her "perfect intonation and beautiful shaping and colouring, comprehensively nailing each new stylistic and emotional universe as she went" as well as the Ostfriesen Zeitung for “a unique, rarely heard musical experience...sensational.” She performs widely across Europe and live broadcasts include BBC Radio 3 ‘In Tune’, Swiss Radio Classic, Hessischer Rundfunk and Yle Radio Suomi (Finnish National Radio). She has been invited to festivals such as Prussia Cove, Fränkische Musiktage, Musikdorf Ernen, Lichfield and Presteigne. In 2021 she attends the Verbier Festival Academy as one of eight violinists chosen worldwide for the Soloist & Chamber Music programme.
Mathilde was the sole British violinist to be selected for the 2019 Queen Elisabeth Violin Competition and in the same year won 3rd Prize at the Windsor Festival International String Competition. Other awards include First Prize at Sweden’s Aurora Music Competition 2018, First Prize of the String Section of the Royal Overseas League Music Competition 2017, and major prizes in 2020 at the Peter Pirazzi Competition (Frankfurt) and Deutsche Stiftung Musikleben. In 2018 she became a laureate of the International Joseph Joachim Violin Competition and won a place on the St John's Smith Square Young Artist Scheme, for which she gave the world premiere of a work written for her by Sally Beamish. She has collaborated closely with other such esteemed composers as Cheryl Frances-Hoad, Huw Watkins and Joseph Phibbs.
Mathilde’s debut CD was released in 2020 and she was subsequently named Classical Music Magazine’s Artist of the Month. The album received widespread critical acclaim - “Mathilde Milwidsky is simply terrific, her tone, technique, and temperament the ideal mix and balance. Five stars: I’d give it 10 if I could. This is one of those once-in-a-decade or more discoveries.” (Fanfare Magazine, US). This was then followed by a 2021 CD release of both Beethoven Romances for the Guild label, and an upcoming debut unaccompanied album also for Guild, to be released later in 2021. Mathilde studied in London with David Takeno and György Pauk and with Professor Mi-kyung Lee in Munich, generously supported by the Countess of Munster Musical Trust, Hattori Foundation, Drake Calleja Trust, and the Tillett Trust. She has received additional tuition from Maxim Vengerov, Alina Ibragimova and Pierre Amoyal, and is grateful to J & A Beare for the loan of a very fine 1720 Stradivarius.
www.mathildemilwidsky.com/

Joseph Havlat was born in Hobart, Australia, and studied at the Royal Academy of Music in London under Prof. Joanna MacGregor from 2012-18. He is currently a Young Artist at St. John’s Smith Square. In 2019 he was selected as a Young Artist at the Oxford Lieder Festival alongside fellow Australian, mezzo-soprano Lotte Betts-Dean, and was the winner of the keyboard section of the ROSL music competition. Aside from work as a soloist he is also a keen chamber musician, performing frequently with hisclarinet trio, the Tritium trio, and also the LSO percussion ensemble. Passionate about contemporary music, he is a founding member and artistic director of contemporary music collective Ensemble x.y and is also an avid composer.
www.josephhavlat.com